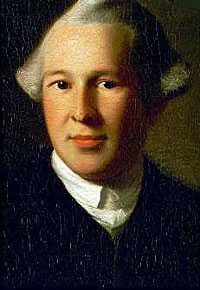 On 13 Apr 1764, John Adams sent his fiancée Abigail a story about being inoculated against smallpox in Boston. Through a cousin of Abigail’s, Dr. Cotton Tufts, Adams and his brother had received a referral to Dr. Nathaniel Perkins. At first Perkins responded that he wasn’t taking any new patients, however, and that the brothers should have prepared with medications before coming into town. When Adams wrote again, dropping Tufts’s name, that changed things:The Dr. came, immediately with Dr. [Joseph] Warren, in a Chaise—And after an Apology,…for not recollecting what Dr. Tufts had told him, Dr. Perkins demanded my left Arm and Dr. Warren my Brothers. They took their Launcetts and with their Points divided the skin for about a Quarter of an Inch and just suffering the Blood to appear, buried a Thread about a Quarter of an Inch long in the Channell. A little Lint was then laid over the scratch and a Piece of a Ragg pressed on, and then a Bandage bound over all—my Coat and waistcoat put on, and I was bid to go where and do what I pleased. (Dont you think the Dr. has a good Deal of Confidence in my Discretion, thus to leave me to it?)The Doctors have left us Pills red and black to take Night and Morning. But they looked very sagaciously and importantly at us, and ordered my Brother, larger Doses than me, on Account of the Difference in our Constitutions.This was the first time Adams met Warren, whom he described as “a pretty, tall, Genteel, fair faced young Gentleman.” Warren was still only twenty-two years old. Eventually he would become an Adams family physician, political colleague, and friend. As a doctor barely out of training, Warren didn’t lead Boston’s fight against smallpox in 1764, but that was the first public health crisis he faced and thus a milestone in his medical career. The Dr. Joseph Warren Historical Society was founded recently by Randy Flood, an interpreter at the American Revolution Museum at Yorktown. Randy’s using the current pandemic to explore the 1764 smallpox outbreak through a series of online interviews, which you can watch here. So far he and Christian Di Spigna, author the Warren biography Founding Martyr, have talked to:Katie Turner Getty, providing an overview of the 1764 epidemic and Warren’s work.Stephen Coss, author of The Fever of 1721, the epidemic that prompted Dr. Zabdiel Boylston to start inoculating patients. myself on how the epidemic might have contributed to Boston’s response to the Stamp Act. Andrew Wehrman, professor at Central Michigan University, on his upcoming book The Contagion of Liberty.