On Facebook, I was delivered a sponsored ad for getting health reports from your DNA raw data at a 55% discount from a company called Xcode Life. @xcode_ls 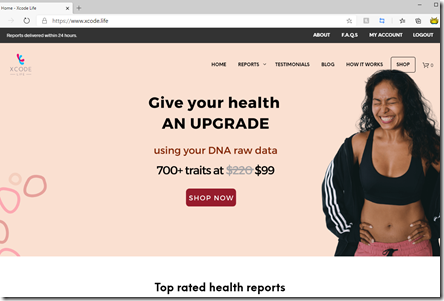 I’ve always been much more interested in DNA for genealogical purposes than for health, but I had never heard of this company and it sounded interesting. Their “Mega Pack report was said to contain reports for Nutrition, Fitness, Health, Allergy, Skin, Precision Medicine, Methylation, Carrier Status, and Traits & Personality in 600+ categories.

I looked around on the internet for a coupon and saved an additional $10 and paid $89 for the package. They accept uploads from all the major companies. I uploaded my combined all-6 file with 1.6 million SNPs in it that was in 23andMe format and it was accepted.

The next morning, 13 hours later, I got an email stating my reports were ready. In the email, they gave me the coupon code REFVTB47WRMU5 worth $10 off any of their packages that I can give away. If you use it, I will also get $10.

I downloaded my reports as a compressed zip file. After unzipping, there were 9 pdf files for the 9 reports ranging in size (for me) from the Methylation report at 10 pages up to the Carrier report at 84 pages.

Most of the reports start with a 2 page introduction, the first page on understanding your report and the 2nd page on how to read your report. Each report ends with a 1 page disclaimer.

The results follow on the next 2 to 4 pages and each trait is presented as one row of a table containing 2 or 3 possible results. They are color coded green for better than average, orange for average and red for not as good as average.

For example, the Personality Results have two possible results. These are a couple of mine with better than average results:

And here’s a couple with just average results:

And then there are those for negative traits:

Whereas the Nutrition, Skin, Health, Allergy and Fitness reports give mostly 3 possible outcome per trait, e.g.:

The remainder of these 6 reports summarize and explain each of the traits, giving a recommendation with the same color as your result. It then tells you which genes were analyzed for the trait, but does not tell you which SNPs were analyzed or what your SNP values were.

The other 3 reports each have their own format.

The Carrier report lists 402 different conditions in alphabetical order and tells you if you have potential pathogenic variants. 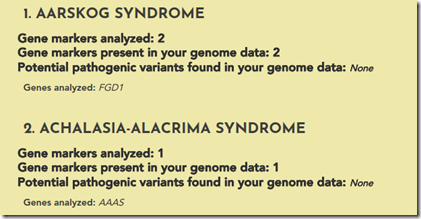 They write in bold red letters in the introduction that these are not to be used for medical purposes. And the disclaimer says only your physician is qualified to interpret this report and incorporate this information in treatment and advice. None-the-less, if anything shows up, it is likely worthwhile following up on it with your doctor.

The other two reports had what I was more interested in. I wanted the actual SNPs identified indicating the value that I had for them and what they meant.

The Pharmacogenetics Report lists the gene variants I have that are associated with my reaction to 185 different drugs: 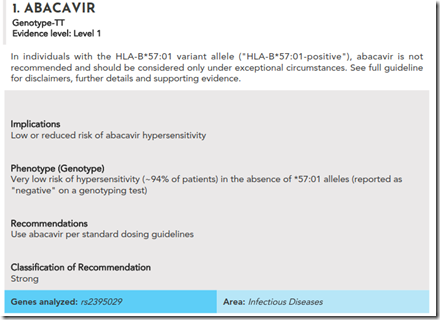 The rsid (Reference SNP cluster ID) is listed,as well as my result: the Genotype TT.  I can find the rsid: rs2395029 in my Raw Data File that I supplied to Xcode.Life and that will tell me where it is by chromosome and position:

I can then look up that rsid on Google and it will bring up lots of other information that can be found about the SNP: 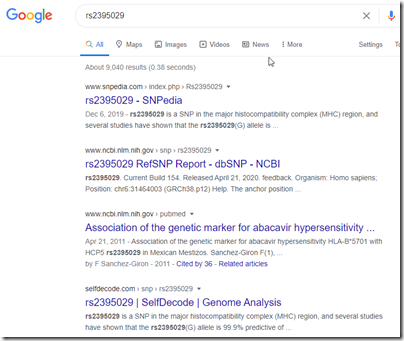 such as SNPedia, which was recently purchased by MyHeritage that they are leaving as a free resource available to all., presumably to give them information for their health tests. 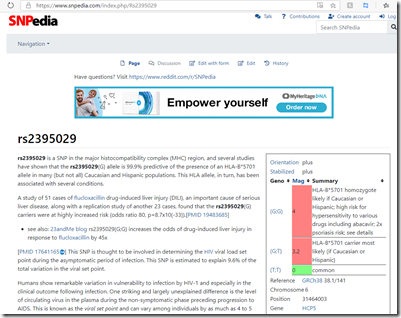 The Methylation Report lists about 60 SNPs from various genes that are associated with conditions such as cardiovascular disease, Alzheimer’s, cancer, depression. They list the normal value, the risk value, and then show your genome values (GENO), shading the line if you have one or two risk values.

If you have some ailment but don’t know what’s causing it, a DNA-based health report like this one from Xcode Life might be a good screen. If something shows up, you can discuss the report with your doctor.

For me, I did this mostly for curiosity. Having the rsids of the SNPs of interest in the Pharmacogenetics and Methylation reports will allow you, as a genetic genealogist to map those SNPs onto your genome with a tool like DNA Painter, and track those SNPs though your ancestors.